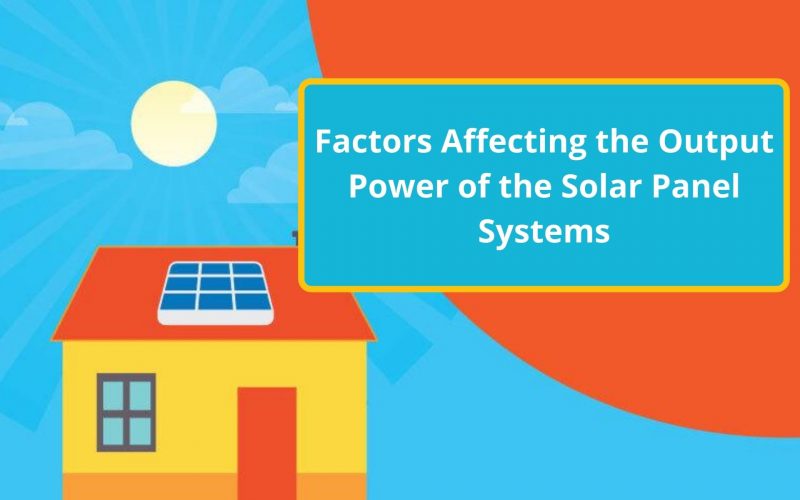 The sun is now halfway in its lifetime.

Yes, researchers have suggested that the sun was born about 4.57 billion years ago and in another 5 billion years, it will consume all its energy.

Well, nothing to worry about. That is still way beyond a normal person’s lifetime.

But, as human beings are; we tend to get all and the best out of everything, even when we know that the thing is going to stay for long, as in the case of the sun. We want to get the maximum output from our solar panel system so that we can get the most of the sun’s free energy.

Factors Affecting the Output of Your Solar Panel System

Researches have revealed that factors such as sun intensity, cloud cover, relative humidity, heat buildup among many others, either increase or decrease power production of solar panel systems. Let us see all such factors in detail here:

Cloudy days contribute to the decrease in sunlight collection effectiveness since clouds reflect some of the sun’s rays and limit the amount of sunlight absorption by the panels.

During summer days when the temperature is at its highest and heat is built up quickly, the solar power output is reduced by 10% to 25% for the reason that too much heat increases the conductivity of semiconductors in the panels. However, if humidity penetrates into the solar panel frame, the panel’s performance can reduce, and worse can permanently deteriorate the performance of the modules.

Shading has a large effect on the performance of a solar power system. Outside the hours of 9 am-3 pm, you can get away with some shading, however, shading within these hours can have a drastic effect on your solar production. Even partial shading of the system can have a large effect as all panels in a section need to run at the same voltage. If one panel is shaded even partially, this will bring down the production of the whole system. There are ways around this such as splitting the array into multiple strings or using micro inverters on the back of panels.

The direction that your roof faces is referred to as the Azimuth angle and is the primary factor determining how much sunshine your solar panels will see over the course of the day. In India, solar panels are most effective when installed on south-facing roofs. However, even if your roof isn’t south-facing, that’s okay, you can have your panels placed to suit your high energy usage times.

Solar panels are given a nameplate capacity, e.g 50-watts based on irradiation of 1000w/m2 (approximately a clear summer day at noon). However, the vast majority of daylight hours do not have such powerful light (maybe 200-800w/M2) and at these lower levels, n-type silicon panels seem to have a significantly higher performance than cheaper p-type silicon panels of supposedly the same capacity. We would suggest you buy panels that have better low light performance.

We hope this was helpful. Have we missed anything? Let us know in the comment section below.