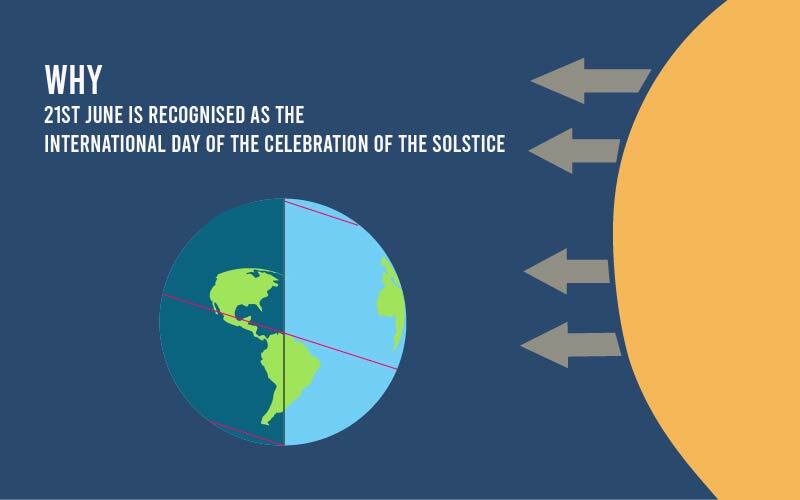 The solstice symbolises the fertility of the land, agricultural and food production systems, cultural heritage and their millenary traditions; the General Assembly of the United Nations acknowledged that the celebration of those events is an embodiment of the unity of the cultural heritage and centuries-long traditions, and further play a significant role in strengthening the ties among peoples on the basis of mutual respect and the ideals of peace and good-neighbourliness. It, therefore, recognized 21 June as the International Day of the Celebration of the Solstice.

the General Assembly of the United Nations

We witnessed an annular solar eclipse on Sunday, 21 June and the people in India also caught this annual celestial event in action. The sky gazers got an opportunity to observe the “ring of fire” during the phenomenon, however, for most parts of the country, the eclipse will be partial.

A solar eclipse occurs when the moon passes between the sun and the earth. When this happens, the moon blocks the light of the sun from reaching the earth. The shadow of the moon is then cast on the earth.

According to NASA, during a solar eclipse, the moon is farther away from the earth. It appears smaller and does not block the entire view of the sun. When the moon is in front of the sun, it looks like a dark disk on top of an even larger disk which appears like a ring of fire.

Significance of the Solstice

The solstice as the embodiment of the unity of cultural heritage and centuries-long traditions in many countries, especially European countries. In the Pyrenees, a small mountain range nearby Spain and France, the summer solstice is celebrated as the fire festival. On the night of the day when the sun is at its zenith,  people from different towns and villages carry torches down the mountains to light a variety of traditionally constructed beacons. The festival is considered a time for regenerating social ties and strengthening feelings of belonging, with celebrations including popular folklore and communal dining. Moreover, the solstices are connected are in fact, also connected with seasons harvests and livelihood. Therefore, many cultures celebrate the solstices.