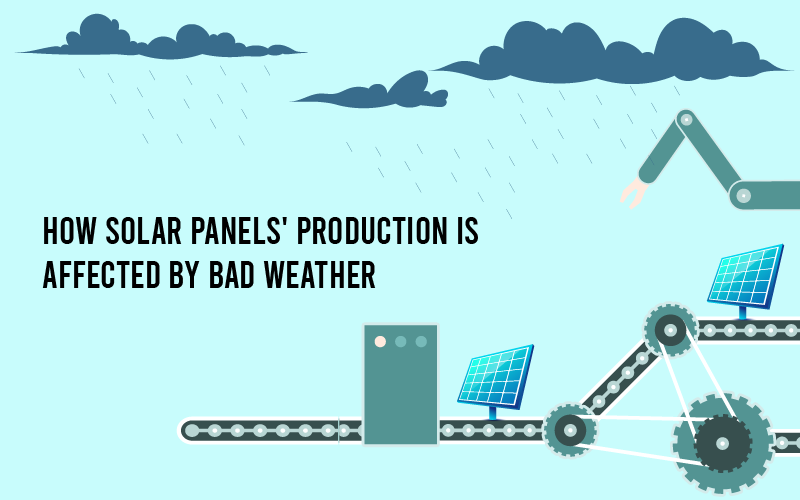 Most of the Indian cities, towns and villages experience bad weather conditions at least once in a year. It does not matter where your solar panels system is located in India, it will have to go through bad weather. And as solar panels are always needed to be exposed to sunlight, they are most vulnerable to any change in the external environment.

Solar panels are however installed with strong mounting frames which are designed to withstand extreme weather conditions, but still, these panels can not work with the same efficiency during adverse weather conditions. If there is heavy cloud cover, solar panels’ energy production with decrease drastically and in most cases, they won’t even produce electricity. If there is rain but with a little sunshine, solar panels would generate electricity but with reduced efficiency. Although, it is not advised to operate solar panels when it is raining outside.

Additionally, during rain and cloud cover, solar panels can use the reflected sunlight from the cloud to produce electricity. The rain actually helps to keep your panels operating efficiently by washing away any dust or dirt. If you live in an area with a strong net metering policy, excess energy generated by your panels during sunny hours will offset energy that you use at night and other times when your system isn’t operating at full capacity.

While the rain itself will have no impact on the panels, the rain clouds will likely lower your production. However, the occasional rainstorm could actually be good for your solar system’s production, because it’s a no-fuss, safe way to clean your panels. Consistent rainstorms keep a layer of dirt or dust from covering the panels and blocking the light, which could lead to a decrease in production.

Though not yet a widely viable option, scientists have been working on a new kind of solar panel that could still produce electricity when it’s raining. Termed hybrid solar panels, these solar cells collect energy from both the sun and the rain. As precipitation hits the panels, the force from the impact is converted into electricity. When it’s sunny, they act just like traditional solar panels (but are still less efficient for now).

What about when that rain freezes into snow? Unlike rain, which doesn’t accumulate on the panels and block light, snow will have an impact on production beyond cloud coverage. After all, what blocks the sun from your panels blocks the panels from making electricity. However, depending on the weather following the snowstorm and the tilt of your panel, even heavy snowfalls will melt and slide right off your panels in no time.