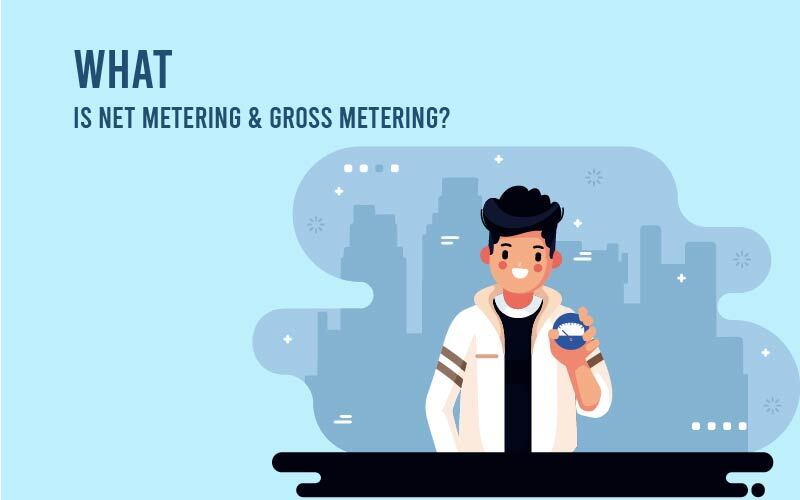 With such a huge demand for energy by the gigantic population of the country, our government continuously lays out programs and initiatives that provide with smart and clean solutions to our energy needs. One such initiative is ‘net metering’, which encourages citizens to opt for solar.

What is Net Metering?

Net Metering is a system of electricity billing mechanism that gives credits residential and commercial solar power systems for making excess electricity with their solar panel systems. When solar panels produce excess power, that power is sent to the grid.

How Does Net Metering Work?

When you have a grid-tied solar rooftop solar system, it can generate more electricity than you consume during daylight hours. So, with net metering, the homeowner is only billed for the difference between the energy produced by the solar power system and the energy consumed by the house over the monthly billing period. Hence, excess energy earns revenue while the shortage of energy is covered by the grid.

For instance, you have a grid-tied solar rooftop system which produces 500 units of electricity every month, and you use 600 units from the grid. So, with the net metering system, distribution companies will charge you for (600 – 500) 100 units with rates set by regulatory bodies. Average rate around the country is Rs10/unit. So, your monthly bill would be 10 X 100 =Rs1000.

And if you produce 500 units of electricity every month, and use only 400 units, you will be billed for 0 units and paid for excess 100 units of energy produced by your system.

Now, as the net metering system is just a promotional initiative for solar energy, it is not going to stay in commission for long. In fact, there is another system that is in discussion for utility billing called ‘gross metering’.

What is Gross Metering?

How Does Gross Metering Work

If the consumer with a solar panel system has a monthly consumption of  500 units of energy and also installed a solar rooftop plant having a capability to generate 400 units of electricity. At the end of every month, he will be charged for total consumed energy which is 500 units at a normal tariff. The energy generated from the solar rooftop plant will be recorded by a separate gross meter and distribution companies will pay for those many units, at the pre-determined rate, called the feed-in-tariff rate.