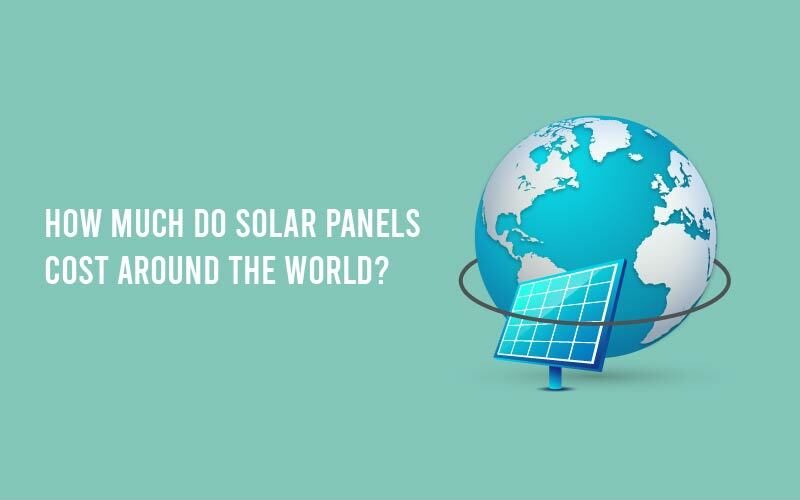 After the 1950s, when the first solar cells were commercially manufactured, many countries have led the world as the largest producer of electricity from solar photovoltaics. First, it was the United States, then Japan followed by Germany, and currently China.

By the end of 2019, global cumulative installed PV capacity reached about 630  gigawatts (GW). And, major solar research agencies have reported that solar installations will grow in 2020, adding another 130 GW resulting in a total capacity of 760 GW. Moreover, by 2050, the International Energy Agency (IEA) foresees solar PV to reach 4.7 terawatts (4,674 GW) in its high-renewable scenario, of which more than half will be deployed in China and India, making solar power the world’s largest source of electricity.

Now, what about the cost of solar electricity in different parts of the world?

Let us see the cost of solar panels around the world.

Price of Solar Panels in India

India is now the forerunner in producing solar power at the lowest cost globally. Which mean that solar panels are cheaper in India than in any other part of the world. Additionally, India is the only country where the cost of setting up solar PV projects between 2010 and 2018 have dropped dramatically and at the fastest pace by 80% compared to other major markets including China’s.

In India, depending on the brand, quality, type, efficiency and total capacity, solar panels cost around ₹25 to ₹70 per watt.

Price of Solar Panels in China

China is leading the world in solar PV generation, with the total installed capacity of more than 150 GW. It is also the world’s largest market for both photovoltaics and solar thermal energy. Three of the top four largest photovoltaic power stations in operation are located in China, including the world’s largest Tengger Desert Solar Park. China’s goal is to reach 1,300 GW of Solar Capacity by 2050 with a serious of cutting-edge and newly-invented technologies like IoT, AI, and 5G.

In China, depending on the brand, quality, type, efficiency and total capacity, the average cost solar panels around is $3 per watt, which is around ₹200 per watt.

Price of Solar Panels in the United States

The United States is an indispensable member of the leading solar trio with the most robust industry ecosystem compared to other countries in the world. Innovative and influential solar energy technologies and market mechanisms are continually making contributions to systems deployment, capacity growth, and price cuts. There is a keen interest of solar across the country, from governments at different levels to businesses of different sizes, social organizations, schools, and numerous households. Though being impacted by solar tariffs, solar energy in the United States is still showing exciting possibilities.

Price of Solar Panels in the United Kingdom

Before 2010, solar power represented a very small part of electricity production in the United Kingdom. However, after the introduction of feed-in tariff (FIT) subsidies and the falling cost of solar panels made solar power boom in the country. As of 2019, installed capacity was over 13 gigawatt. In addition to this, solar PV panels have a capacity factor of around 10% in the UK climate.

The cost of solar panels anywhere in the world depends on factors like the manufacturing process, technology involved, government outlook and the demand. All across the globe, every factor has been on track and eventually, we will see a tremendous downfall of the prices of the solar panel all around the world.

Do give our blog a read for all your solar-related questions. You can also check out other interesting updates on solar on our Facebook page (facebook.com/zunroof)
Reach out to us by filling the form below: