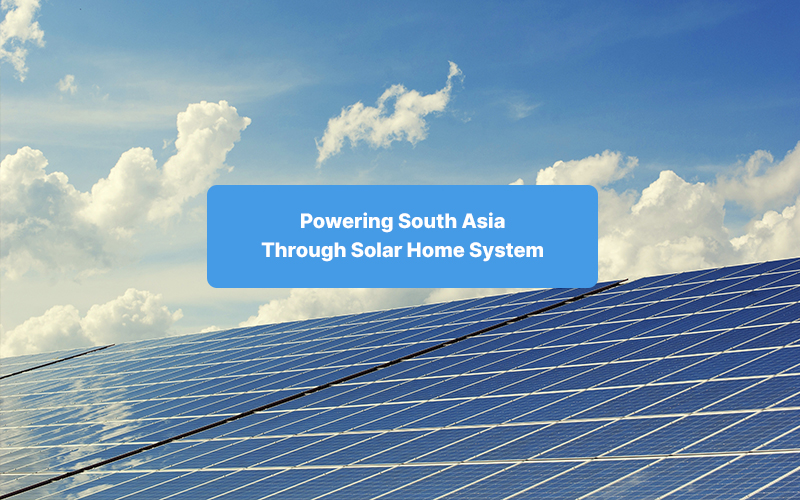 Time is running out for the world to reach sustainable development goals(SDGs), and to be frank, it is actually struggling to reach there. Off-Grid solar is emerging as one of the powerful tools for change. Through the help of modern technology and business innovation, the industry is working in tandem with other non profitable organizations to develop products and services. This could bring light to energize poor households residing in the towns and streets of South Asia. The newly launched Solar Home System is generating a positive impact in the lives of common people  through solar home systems.

According to the “Tracking SDG7 Report”,  there are only 10 years left to achieve Sustainable Development Goal 7. SDG7 was developed  to provide access to affordable,reliable, sustainable and modern energy and electricity for all. The number of people without access to energy remains an unprecedented 200 million in Central and South Asia in 2018. Though, this number is humongous, but, considering the progress made, its down from an eye catching 660 million in 2014. This was made possible due to the production of off-grid solar cells. According to a survey done by GOGLA, it was found that around 93% of the people in India and 70% of the people in Pakistan are now in access to electricity. GOGLA is a global association for the firms working in the off-grid solar energy industry. Found in 2012, GOGLA now represents over 170 members over the globe. Services in GOGLA assist the associated ventures in the industry to build sustainable markets and profitable businesses which deliver quality and  affordable off-grid electricity products and services.

What Is the Solar Home System?

Solar Home System(SHS) is a small to midsize system which uses photovoltaic solar energy to provide electricity where the grid can’t be accessed. SHS systems harness solar energy through photovoltaic panels installed nearby the house or building. It is then connected to a battery bank. During night hours, the battery bank, installed within the system, supplies electricity to specific appliances powered by the system. Such systems are constructed and individually sized which suit the end users’ needs and can be used for households offices or business entities spread around a small but defining areas such as a village.

The GOGLA survey was conducted in the rural, peri-urban and semi urban areas of the Indian subcontinent(India, Pakistan, Bangladesh, Nepal, Sri Lanka). This survey mainly hovered around the Assam State Of India, Kandy and Galle in Sri Lanka, Sylhet in Bangladesh and the Sindh Province in Pakistan. Around 949 houses were covered in the survey.

For 61% of the customers in this study, the SHS is a back-up to the grid, complementing grid power by increasing availability and reliability of supply. Another 37% of customers said the SHS is their main source of light. Most of these customers mentioned that it was their first experience of access to clean, affordable and modern power.

Mohammed Ashraf, based in Wasi Adil Mori Talhar of Sindh Province in Pakistan says, “With the implementation of SHS, we can now light our home during evening. It makes it easier for us to cook food, and we can now sit together and talk after dark. This was not possible before. My son and daughter are able to study at night as well, which helps them to excel in school.”

Shikha Dutta from Howli in Assam was able to organize her dying sewing business and made considerable gains, after putting up SHS. “Electricity was not always available in Howli, which makes it difficult to sew especially in the evening. Before I started to use SHS, I used to injure myself as the needle would pierce through my skin. The system gets charged by sunlight, reducing my electricity bills to a considerable amount. My dream is to buy ten to twelve sewing machines and employ other people in Hubli as well. This could be a huge success for me.” Shikha added in her brief interaction with Gogla.

With light, respect and infrastructure, SHS helps households unlock economic opportunities and increase their income. Around 12% of the SHS customers reported undertaking additional economic activity after implementation. Economic activity included customers using their SHS in a business. This also added to more working hours(even at night) generating an increase in the net revenue.

The most common types of business which operate with SHS are small commerce, shops or stalls (50%), followed by small home businesses (26%) . The latter has a lot of variegated activities that are conducted from the home without a fixed location or space for operation. They may not be conducted on a regular basis. These activities include cottage industries like knitting, handicrafts and selling confectionery.

With the introduction of better technologies and undisruptive transmission lines, a majority of households in South Asia(61%)  already had some form of access to electricity. Researchers from Gogla found that SHS still has an important role to play. Thus, irrespective of the situation of accessibility of electricity to consumers , SHS has the utmost potential to increase the quality of life and livelihoods as well.