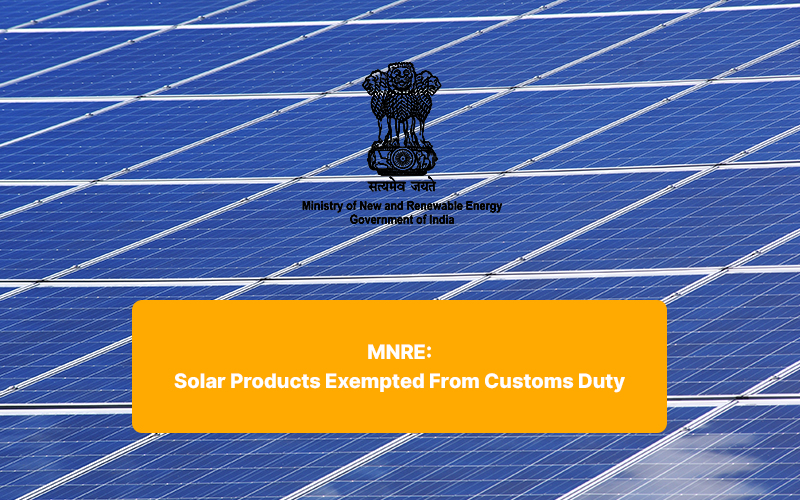 In a major development for the renewable energy industry in the nation, the Ministry of Renewable Energy has exempted the solar developers from Basic customs duty. This move is in line to promote domestic solar manufacturing. This comes after the development last year when Maharashtra Government imposed an exemption in customs duty for solar panels and solar modulators in their area.

The solar products which were included in the announcement were solar cells, modules, and ingots. In a recent statement released by the MNRE, “The MNRE has taken up with the finance ministry the issue of exemption of BCD on import of capital goods required for setting up manufacturing units of solar photovoltaic cells, modules, wafers, ingots, and polysilicon,”.

Solar developers, all over the nation spoke regarding the maintenance and expenditure required for solar equipment. Since India imports most of the solar products with bypass diodes only, exempting them from customs duty.

The reclassification after the customs became a serious issue for solar developers with solar imports being held back, first at the Chennai Dock Port and then ports all over the nation. By October 2017, over 1,000 containers of solar equipment had piled up at Chennai port alone, with developers contesting the duty charged. This had somewhat hindered the development of the solar industry in the nation.

India used to face stiff competition from China regarding the solar products, as Xinping-led Chinese government had already clamped down solar customs. With this development, more companies and investors are expected to be in line to join the solar industry, making India one of the biggest solar markets in the world.