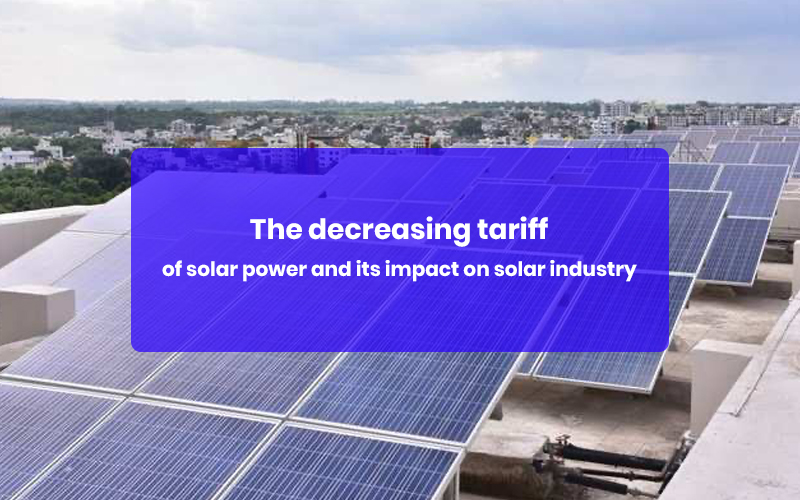 Recently, in an auction, SECI (Solar Energy Corporation Of India) revealed the marginal increase of tariffs in solar powered plants. This comes after the Trump Government imposed tariffs on solar powered panels. SECI is basically a nodal agency for the Ministry Of Natural Resources which helps in the conducting of auctions for the tender of wind and solar powered plants. Talking briefly about the auction, Reuters reported, it carried a mind boggling figure of 1200 MW of energy and the companies which went the distance were the Indian solar biggies like Ayana, Mahindra Susten and Vikram Solar.

When the economic experts analyzed the write-up, they found it to be radically incorrect . Talking with respect to the Indian market scenario, if all the sources of power and electricity are put together, the prices of solar are the lowest among them. KPMG’s reports of 2020 stated that the solar prices at Maharashtra’s Chatgaon Solar Powered Plant are valued at INR 2.44/unit which is extremely lower than the average value INR 3.32/unit, which NTPC sells to the public through the thermal power plants.

Considering economic fragmentation, the technology cost curve will always come into account. Electricity through solar was once priced at a staggering INR 8/unit but the perfect investments with respect to time had resulted in a considerable decrease in solar prices. This is when the-then chief minister of Gujarat, Narendra Modi took a bold step of installing the first solar powered plant in India. This was considered as a risk, but became a master stroke over the years, eventually giving rise to an all new solar powered industry.

Since solar powered energy will increase in the near future, one should always consider the tariff as one of the factors which will be shaping the industry. The economic policies of today have made solar as one of the cheapest means of power, which prompted not only the industries, but also domestic households to switch to solar-induced electricity. As far as the policies of economic irregularity is concerned, the problems would shoo away once the government vision of 460 GW of stored energy comes true.

Another reason why the economy of solar energy is here to stay is the hybridization process. A combined project of solar and wind will be generating more electricity if compared to a thermal power plant. Going into the statistics, a solar powered plant will be able to produce a minimum of 4 kW. On the other hand, a thermal power plant will be able to produce only 1kW, in addition to much lesser consumption and CO2 emissions as well. Storage could be one of the important factors which had driven the solar economy in a whole other way. Storage costs will once come down when the lowered costs of batteries will ensure the perfect integration of energy in the batteries, resulting in a much better supply of the solar panels.

Tariffs in the recent market trends of the solar industry is decreasing due to recent reformations policy makers are inserting within the economy. Taking the case of US, after Trump announced increased tariffs on residential solar powered plants, Chinese solar companies, which were once a major source of residential solar powers in the US are reluctant to do business there. This had an impact on the energy economies of China, as the foreign demand makers of the Chinese franchisee owners are gone, lowering the financial income of their renewable economy . This highlighted the fact that the economy sometimes depends on some other factors as well other than supply and demand. This is when the reformers and policy makers take an entry in the game.

Solar industry over the years has grasped the eyeballs of a lot of people in India and the world. Right from a farmer to a homemaker and even an industrialist are craving to install solar panels in order to reduce their bills.  A mere decrease in tariffs would not play a role in bamboozling the ever growing solar industry.