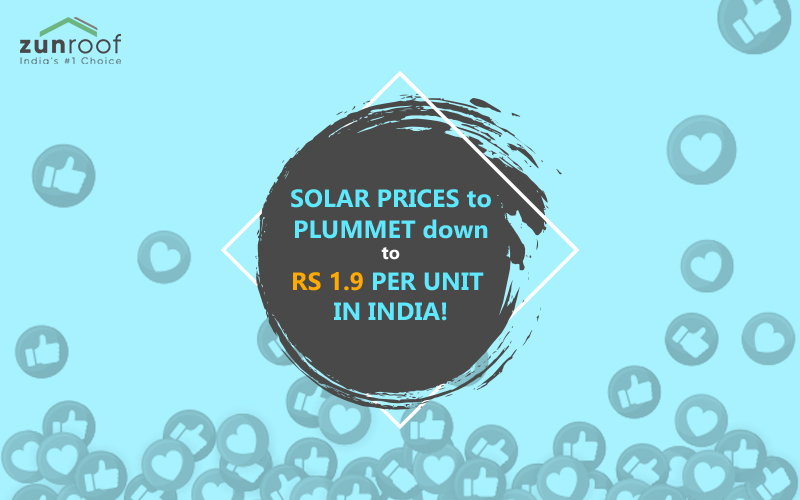 Over the course of the next decade, through 2030, the cost of generation of solar power are set to go DOWN to Rs. 1.90 per unit. The 2019 report published is titled ‘Accelerating India’s transition to Renewables: Results from the ETC India Project’. Consequently, buying solar systems will become more mainstream at such prices. With the increase in popularity of solar technologies like On-Grid Solar Rooftop Systems, the economics of renewable energy in India should quickly stabilize.

This joint study was done by TERI (The Energy and Resources Institute, India) and CPI (Climate Policy Initiative, USA). They projected that by 2030, 1 kW price for solar will be around Rs. 2.30 – Rs. 2.40 per kilowatt hour. The cost of storage of solar too would also go down by a WHOPPING 70 percent. Today, the rate is capped at around Rs. 2.60 per unit for domestic and commercial installations.
The study estimates that the cost of solar in India can be as low as Rs. 2.30 per unit, and can become EVEN CHEAPER at approximately Rs. 1.90 per kWh. Well, to be fair, that’s possible only if the development of tracking technology raises the utilization of new solar power plants. Examples include Net Metering on grid-connected solar systems, Solar Apps, etc.

Well, let’s put things into perspective. Traditional grid electricity supply rates are based on slabs and differential rates per unit. An all-India all-slab average is around Rs. 5.50 – Rs. 6.50 per unit. However, this rate fluctuates every year anyway. But, simply contrasting the two rates, we see that there exists a difference of Rs. 2.00, which is QUITE BIG a difference.

Finally, the report pointed out, “This would make India’s power sector as clean as that of Japan today. It would represent a truly unprecedented leapfrog into a cleaner electricity system.”