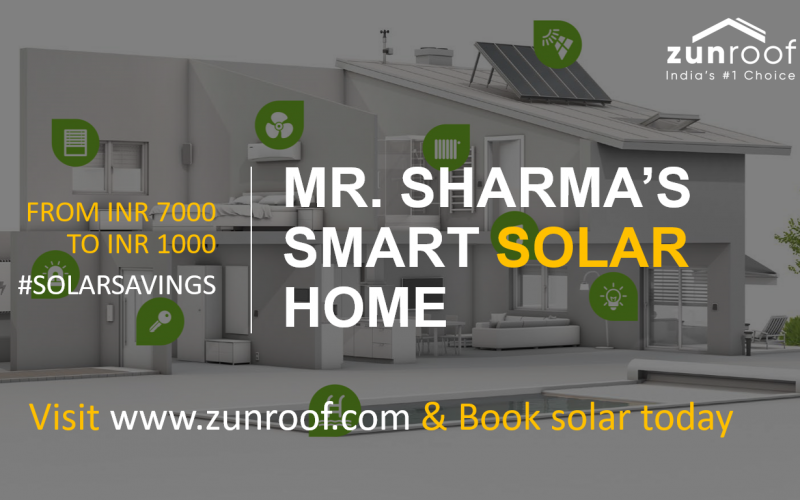 From INR 7000 To INR 1700- Here Is How Sharma Switched To A Smart Solar Home! #SolarSavings

This story is being narrated by JK Sharma, a resident of Gurugram, who decided to switch to solar. Sharma resides in Surya Vihar near Kirti Montessori Play School and recently went solar with ZunRoof – a home grown solar rooftop installations provider. His electricity bills have been reduced by 75% and he is now enjoying the benefits of solar.

WHY OPT FOR SOLAR- WHAT WAS MR. SHARMA’S STORY?

The area where J. K. Sharma’s home is located has enough power supply but the per unit rate of electricity is high. He lives with his family in a house owned by him.

Sharma decided to reduce his electricity bills and wanted to enquire the best possible solution for this problem. He then went online and started doing some preliminary research, as we all are trained to do! He stumbled upon the ZunRoof website and was impressed to see ZunRoof’s dedication as a rooftop solar solutions provider. He then decided to call ZunRoof and thus began the wonderful journey of Eklavya as a happy ZunRoof Client.

As a part of ZunRoof’s regular procedure, we first went to his home and carried out a detailed site assessment and suggested Mr. Sharma to install a 5KW Grid Tied-solar system in his home.

Grid-tie solar inverter, also known as the on-grid solar inverter, works in connection with the main grid. It offers the advantage of running load directly through solar and selling excess solar power back to electricity company by feeding the grid. A grid-tied inverter can only be installed in areas where mains supply is sufficiently available, which was perfect for Sharma’s home.

The state of Haryana receives approximately 11 hours of daylight every day. And investing in solar power in this area would bring perfect results and reduce electricity bills to a maximum.

ZunRoof then suggested for the following system configuration to be installed in Sharma’s home :

The system is expected to generate approximately 20 units of electricity daily depending on weather conditions. The installation was a great success. The system is now running on solar and always provides electricity in this home.

HOW DOES NET METERING WORK?

So instead of paying for a total of 380 units, Sharma will just pay for 20 units imported from the electricity board. Since out of the 80 units imported the 60 units exported will get reduced.

The net metering and subsidy given by the government make solar power a very cost effective and affordable solution for one and all.

Sharma says ‘As promised by bills have reduced substantially. Great installation work done by ZunRoof team. When I decided to go solar, I was prepared for a long journey for the entire installation process. It is interesting how ZunRoof has made it so easy for us busy people to go solar. Would highly recommend.’

We wish Sharma and his family all the best with solar and hope others take inspiration from such initiatives.

To watch us live in action and hear what our customers have to say about us, click on this video – https://www.youtube.com/watch?v=es_SDsqb91M

Do give our blog a read for all your solar related questions and check out other interesting updates on solar on our Facebook page (facebook.com/zunroof).

You can also reach out to us by filling the form below:

Grab Exciting festive season offer in Solar. To avail an offer, Book your solar site assessment in just INR 80 and get a gold coin also after placing an order with us. To Know more visit us on zunroof.com or call us on +91-920-569-5690.