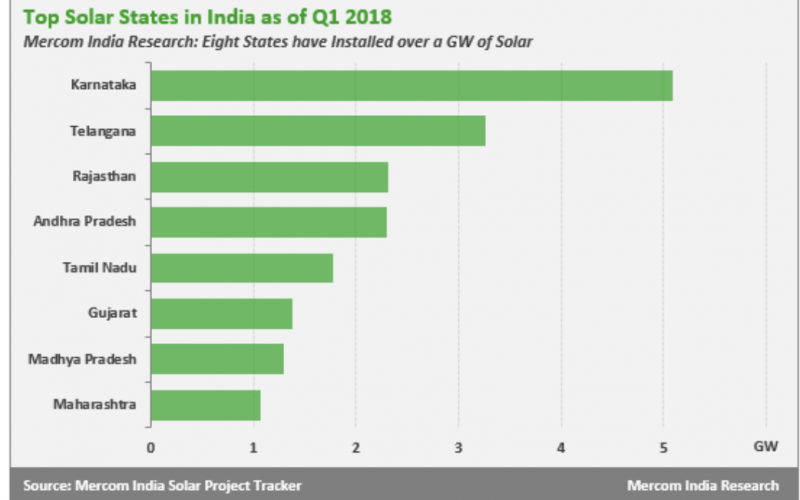 Karnataka’s solar photovoltaic (PV) capacity crossed the 5 GW mark in the first quarter of 2018 to transform it into India’s top solar PV state.

Mercom reported that utility-scale projects accounted for 90 percent of the 9.6 GW of total solar installations added during 2017. During the period, Telangana and Karnataka each installed more than 2 GW of solar capacity.

In Karnataka where land availability is an issue, implementing agencies have gone for the taluk wise allocation of projects to avoid burdening the existing grid infrastructure and to optimally utilise available land.

Recently, over 1 GW of solar PV capacity was auctioned and awarded in Karnataka. Mercom reported that the Power Purchase Agreements (PPAs) for solar projects totalling 640 MW to be developed in various taluks of the state have now been signed.

Mercom also reported that KREDL has auctioned 550 MW of solar projects to be developed at the Pavagada Solar Park in the Tumkur district of the state.

“Karnataka has done a commendable job so far in becoming the state with most solar installations. The big question is what happens in Karnataka after the 1 GW of projects remaining in its development pipeline get completed. If power demand remains weak and solar power becomes more expensive due to tariff imposition, future activity is likely to be less robust,” said Raj Prabhu, CEO of Mercom Capital Group.

To go solar with Zunroof please fill below form