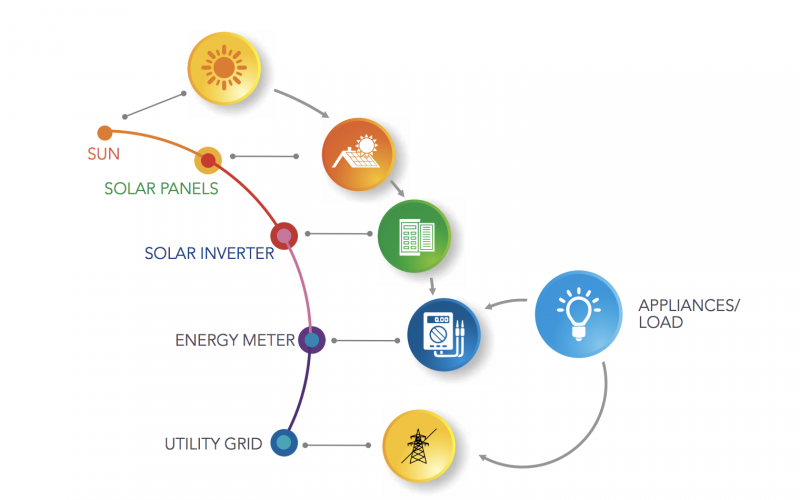 In grid connected solar rooftop system or small SPV system, the DC power generated from SPV panel is converted to AC power using power conditioning unit. This is fed to the grid either of 33 kV/11 kV three phase lines or of 440/220 Volt three/single phase line depending on the capacity of the system installed. Around 10 sq.m area is required to set up 1 kWp grid connected rooftop solar system.

These systems generate power during the day time which is utilised fully by powering captive loads and feed excess power to the grid as long as grid is available. In case, where solar power is not sufficient due to cloud cover etc., the captive loads are served by drawing power from the grid. 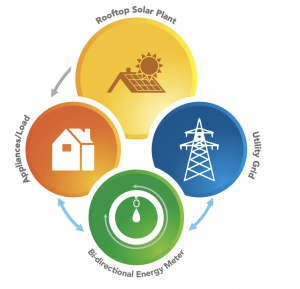 The way electricity is billed strongly influences profitability of the PV investments. To fully harness the benefits of the investments, the final user should be able to make the most of metering system.

Net metering systems are primarily aimed at providing an opportunity to consumers to offset their electricity bills. A single meter records both import of conventional energy from distribution grid and export of solar energy into distribution grid. Thus, net metering allows the final user to credit produced energy in the grid and is also promoted as a preferred option.

To install a grid tied solar PV rooftop system please fill below form and Zunroof will give you a call within 24-48 hours.