UNSW Sydney congratulates solar energy pioneer Scientia Professor Martin Green, who has become the first Australian to win a prestigious Global Energy Prize worth more than $820,000 for his research, development and educational activities in the field of photovoltaics. The annual Global Energy Prize honours outstanding achievements in research and technology that are addressing the world’s pressing energy challenges. It is presented each year by the President of the Russian Federation.

Professor Green, who is Director of the Australian Centre for Advanced Photovoltaics at UNSW, was honoured for having “revolutionised the efficiency and costs of solar photovoltaics, making this now the lowest cost option for bulk electricity supply”. He was selected from 44 contenders from 14 countries by a committee of leading scientists and shares the RUB 39 million ($820,000) prize this year with Russian scientist Sergey Alekseenko, an expert in thermal power engineering. The Global Energy Prize has a reputation score of 0.48 on the IREG List of International Academic Awards, with a Nobel Prize scoring 1.0. The ten finalists this year included businessman and engineer Elon Musk.

Professor Green is a world-leading specialist in both monocrystalline and polycrystalline silicon solar cells, and the research group he founded in UNSW Engineering is the largest and best-known university-based photovoltaic research group in the world.

The enormous reductions in costs in photovoltaic solar systems in recent years is directly related to his scientific efforts, largely through the work of his students in establishing manufacturing centres in Asia. 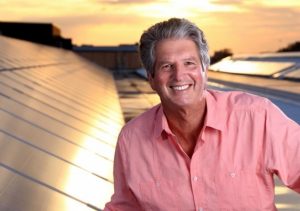 His record-breaking achievements stretch across decades. In 1989, his team supplied the solar cells for the first photovoltaic system with an energy conversion efficiency of 20%. And in 2014, he headed the development team that first demonstrated the conversion of sunlight into electricity with an energy conversion efficiency of 40%. Among his many breakthroughs, he invented the PERC solar cell, which accounted for more than 24% of the world’s silicon cell manufacturing capacity at the end of 2017. Sales of systems containing this solar cell exceeded US$10 billion in 2017 and are predicted to exceed US$1 trillion by 2040.

The use of PERC solar cells (solar cells with the passivated emitter and rear surface) is predicted to save at least $750 million in power production costs in Australia alone over the next decade.

The highly prestigious Global Energy Prize was established in Russia in 2003 through the Global Energy Association, with the support of leading Russian Energy companies Gazprom, FGC UES, and Surgutneftegas. The choice of winners is made by a committee of 20 leading scientists from 13 countries.