Grid refers to the electric grid, a network of transmission lines, substations, transformers and delivers electricity from the power plant to your home or business. It’s what you plug into when you flip on your light switch or power up your computer. Our current electric grid was built in the 1890s and improved upon as technology advanced through each decade. Today, it consists of more than 9,200 electric generating units with more than 1 million megawatts of generating capacity connected to more than 300,000 miles of transmission lines. Although the electric grid is considered an engineering marvel, we are stretching its patchwork nature to its capacity.  Moving forward, we need a new kind of electric grid, one that is built from the bottom up to handle the groundswell of digital and computerized equipment and technology dependent on it—and one that can automate and manage the increasing complexity and needs of electricity in the 21st Century.

What Makes a Grid “Smart?”

Digital technology allows two-way communication between the utility and its customers, and the sensing along the transmission lines is what makes the grid smart. Like the Internet, the Smart Grid will consist of controls, computers, automation, and new technologies and equipment working together, but in this case, these technologies will work with the electrical grid to respond digitally to our quickly changing electric demand.

The ageing power grid also faces new challenges posed by higher demands and increasing digital and nonlinear loads. And the sensitivity of digital equipment (as found in data centres and consumer electronics) to intermittent outages has certainly redefined the concept of reliability.

Continued economic growth and improvements in the quality of human life are very much dependent upon access to affordable and reliable electricity. However, more often than not, existing grids suffer infrastructural problems due to the fact that systems are simply outdated and unfit to deal with increasing demand. As a result, network congestion occurs more frequently as the ability to react quickly does not exist. Ultimately these limitations can lead to blackouts and the consequent domino effect due to the lack of communication between the grid and its control centres.

Currently, consumers do not have access to real-time information that could empower them to make optimal decisions regarding power usage relative to the market. This could enable them to reduce consumption during the most expensive peak hours and take advantage of reduced tariffs during off-peak times.

Smart Grid represents a host of solutions that can address all of the above-mentioned. Indeed, a complete implementation will make renewable power feasible and equip the grid to meet increasing energy demands. More importantly, perhaps, the technology will also allow consumers near real-time control of their energy bills and facilitate large-scale electric vehicle charging. 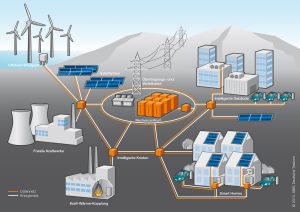 Smart Grid will certainly address many of these and bring additional enhancements, it is envisaged that the consequently reduced operations and management costs incurred by utilities will ultimately drive energy costs down for the end consumer.

The Smart Grid will consist of millions of pieces and parts—controls, computers, power lines, and new technologies and equipment. It will take some time for all the technologies to be perfected, equipment installed, and systems tested before it comes fully online. Smart Grid is evolving, piece by piece, over the next decade or so. Once mature, the Smart Grid will likely bring the same kind of transformation that the Internet has already brought to the way we live, work, play, and learn.