Solar energy is a major renewable energy source with the potential to meet several challenges we face as humankind. This power source is increasing in popularity because of its versatility and many benefits to people and the environment. Climate change has led to real crisis, with increase in flooding and hurricanes due to disturbed weather patterns. High carbon dioxide content in the atmosphere is making oceans acidic and killing marine life. Higher temperatures lead to melting of polar ice caps, reducing habitats for wildlife and increasing sea level. Irregular rainfall or increasing droughts affect agriculture and livelihoods of the weaker sections of society all around the world.

Solar power can restrict climate change. With reduced carbon footprint, solar is a safe alternative that can replace the burning of fossil fuels for generation of electricity that produce air, water, and land pollution.

Solar energy, in many different forms, is the source of nearly all energy on the earth, and humankind has harnessed the sun’s energy in several ways.
Photovoltaics (often abbreviated as PV) are simple devices that provide us with an elegant method of harnessing the sun’s energy. PV devices (solar cells) can directly convert the incident solar radiation into electricity. They produce no noise, produce no pollution, and do not include moving parts. Hence, they are robust, reliable and long lasting. 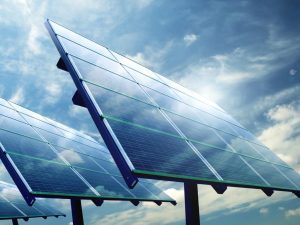 In 1960s, research in photovoltaics received its boost from the requirement in the space industry. Satellites required a power supply for satellite applications, separate from grid power. . Silicon solar cells back then were far too expensive, and the perceived need for an electricity generation method was still unseen. However, solar PV cells were an interesting scientific variation to the rapidly expanding silicon transistor development with several potentially specialized niche markets.
In the 1980s, research into silicon solar cells paid off as solar cells began to increase their efficiency. In less than half a decade, silicon solar cells achieved the milestone of 20% efficiency. 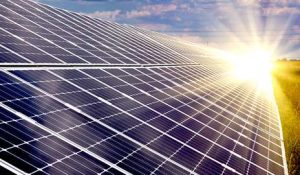 The primary component of a solar cell is silicon. Silicon is a semiconductor material at its core, and actually a very poor conductor of electricity. In 1839, Edmund Becquerel discovered that electrical energy could be harnessed from the sun during certain electrochemical configurations. Silicon is suitably doped with certain impurities to employ a solar photovoltaic (PV) cell to capture energy from the sun and convert it into electricity.

In the operation of solar cells, the principle is that when a photon reaches a semiconductor, it ejects an electron leading to the creation of two conductors: the free electron and the electron hole. When the PN junction is exposed to light, photons with energy greater than the bandgap of silicon cells are absorbed, causing the emergence of electron-hole pairs. These carriers are separated under the influence of electric fields within the junction, creating a current that is proportional to the incidence of solar irradiation.

Electricity is created without noise, in a clean way and without any harmful by-products.

A PV module consists of a number of interconnected solar cells (typically 60 or 72 connected in series) encapsulated into a single, long-lasting, stable unit. Encapsulation is done to protect the solar cells from mechanical damage and for the module to sustain in harsh environment.