Today, we’re diving into the different types solar technologies and which ones are right for your home.

The term “solar energy” simply refers to the energy that comes from the sun, generally in the form of light or heat. Much of the energy we use each day can be traced back to the sun’s energy. Think about it. Biofuels like ethanol and wood are the result of plants turning sunlight into energy to grow. Wind is a result of different levels of heating from the sun around the Earth, causing air to move that we then capture with wind turbines. And yes, even fossil fuels like oil and coal are the result of plants turning sunlight into stored energy millions and millions of years ago. These plants then died, got buried deep beneath the ground, and gradually morphed into fossil fuels.

There are two main technologies used to turn sunlight directly into electricity – solar panels (also known as solar photovoltaics, but we can just say “solar panels”) and concentrating solar power. Solar energy can also be used to provide heating for buildings directly, without any conversion to electricity. We’ll cover all of these.

Solar photovoltaics are what most people think of when someone says “solar power” or “solar panels”. The word, “photovoltaics,” comes from the Greek word for light (“photo”) and “volt”, the unit that measures electric force. And that’s exactly what solar panels do: turn sunlight into electricity.

The scientific principle that makes solar panels work – the photovoltaic effect – was first discovered in 1839 by Alexandre-Edmond Becquerel, a French physicist. But it wasn’t until the 1940s that the first solar panel was actually made. Today, however, solar panels have become an integral part of the India’s energy mix and are used on many different scales, from single-family homes to large, utility-owned installations. Residential solar was the fastest-growing segment of the solar industry in 2017, as the cost of installing and owning solar panels has fallen drastically and more and more people have realized the benefits of solar-powered homes. 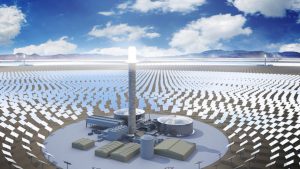 The second main type of solar energy technology, concentrating solar power, is quite different from solar panels. The technology uses reflectors (think of them as mirrors) to concentrate sunlight onto a small, high-efficiency solar collector where it heats up a fluid such as water or molten salt or synthetic oil. That heated fluid produces steam, which is used to drive an electric generator.

Some solar technologies don’t convert sunlight into electricity, but instead use the sun to provide direct heating to buildings. Solar water heating, for example, can provide hot water for a building by running water past a solar energy collector (pictured below), where the sun’s energy heats water before sending it back to the building. Just heating water can account for 14% of  a home’s energy use, so offsetting this cost can make a real dent in one’s utility bill.

Solar energy can also be used for temperature control in buildings without any special equipment. Have you ever curled up with your favorite book in a sunny spot in your house to stay warm? You’re using solar energy! The strategic use of sunlight can increase people’s comfort: architects and designers can design rooms with specific building materials and orientations to make the rooms feel comfortable all day long. When you combine this kind of design with electricity-producing solar panels, it’s actually possible to achieve a net zero carbon emissions building!

Solar power is easier to use today than ever

The innovation and improvements in solar energy technologies continue to be exciting and are probably well beyond what Edmond Becquerel ever thought possible when he proposed how to turn sunlight into electricity more than a century and a half ago. Even with all the improvements we’ve made over the years, much of the solar power used around the world still employs the same basic concept Becquerel discovered. We’ve simply made it cheaper and more efficient to install solar panels, which is why the use of solar power is spreading so fast. After all it only takes a few days to install a system that can harness an energy source that will keep providing us energy for the next 5 billion years! Sounds like a bright idea.