Last year, we were excited to report that solar contributed to almost 40% of all new installed power capacity in the first three quarters of the year. Continuing in the same vein, Mercom Capital Group has now published its findings for the entire year of 2017.  According to their report, solar was the top source of new power capacity. It accounted for 45% of total power additions in India. In terms of actual quantities, India installed around 9.5GW of solar energy capacity in 2017, bringing the total to 19.5GW.

The 45% contribution represents a massive 168% increase from last year. Table below indicates that, up until only 6 years ago, solar’s share in new installations was as low as 5%. 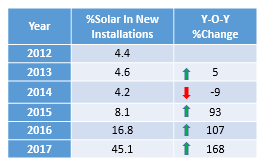 However, with increasing interest in deriving power from cleaner forms of energy and protecting the environment, solar seems to be replacing coal as the future go-to source of power.

Will India be Able to meet its 2022 Solar Target?

According to the Jawaharlal Nehru National Solar Mission(JNNSM) , India is supposed to have 175GW renewable energy capacity by 2022. Of this, solar energy will account for 100GW. Currently, we are five years away from our deadline and around 80GW short of the solar target.

At the end of 2016, renewables accounted for 52GW of total capacity in India. Of this solar accounted for 19.5% or 10.1GW. By December 2017, total solar capacity was at 19.5GW, representing a 92% increase year on year. If for the next five years, India manages to keep the growth of solar energy installations at even 39% year-on-year, we should be able to hit our targets. However, amidst the 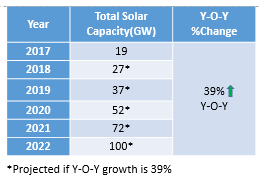 uncertainty around prices of solar module imports and the expected re-negotiations of power purchase agreements, we are not sure if market conditions and the policy environment will enable growth at that level.

Of the 100GW solar target, rooftop solar is to account for 40GW of energy . The remaining need is to be met through utility scale solar installations. Bridge to India, a renewable energy consulting firm, projects 44GW of total utility scale capacity addition in India by 2021. This should bring us quite close to the 60GW target.

In the same report as above, however, the consultancy has also stated that India’s current rooftop contribution to total solar energy capacity is only 10-12% or around 2GW. This is nowhere close to the target of 40GW by 2022. Bringing rooftop solar up to speed will require concerted efforts by the government as well as individuals.

Overall , 2017 has been a great year for renewables, and in particular for solar. It was the first time ever that renewable energy surpassed coal in terms of capacity addition in a single year. This reflects a true shift towards renewable energy in India and an attitude that supports transition from fossil fuels. The government needs to undertake initiatives to encourage this transition. It has already started providing support via subsidies and schemes like rent-a-roof. You too can play a role in helping India become less dependent on fossil fuels by going solar!

ZunRoof continues to guarantee the best price and bring available subsidies to your rooftops. If you are looking to go solar, the best time is now. Fill out the form below or click here or call +91-920-569-5690 and we’ll do the rest: