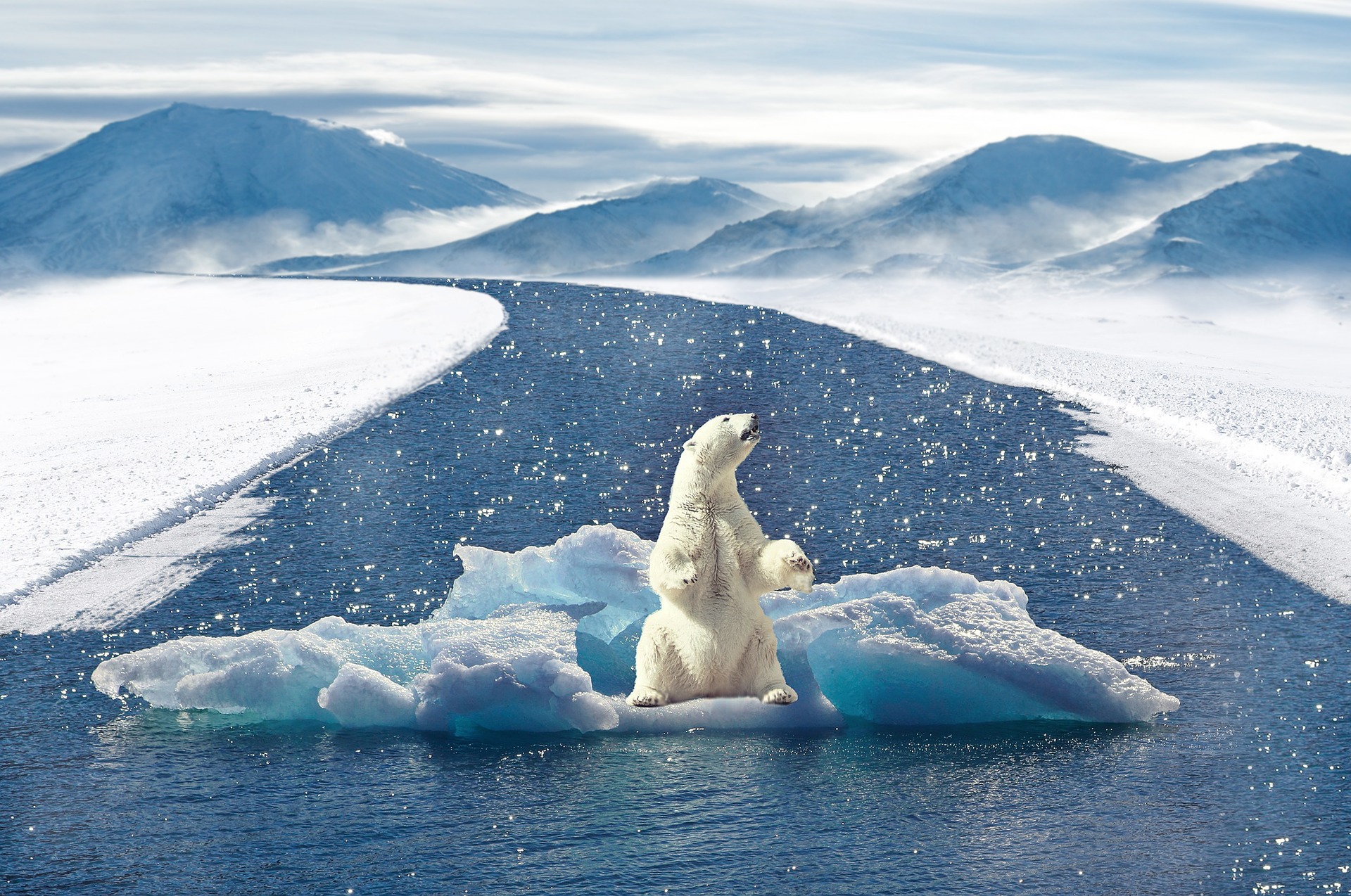 To stay or not to stay? Optimists would like to think that Trump still asks himself that question every day since he withdrew US from the Paris Climate Agreement. It is, however, more probable that his self-reflection is limited to questions like,”Whose hair is the prettiest of them all?”.

Trump withdrew from the Agreement, stating among many reasons that he, “(I) was elected to represent Pittsburgh, not Paris.”In the same announcement, he stated that the US is open to re-engage if given more favorable terms. But leaders, the world over, have singularly stated that re-negotiations for one country will not be entertained. Thus, no matter how much the world wants to believe last week’s rumors of the White House softening its stance, it shouldn’t.  This hope would be akin to expecting that if India needs 7 runs on the last ball of a cricket match, the opposing team will throw a no-ball and it will be smashed for a six.

Wait. Sorry. That actually is possible.

Now, to properly understand the repercussions of this withdrawal, we need to obtain a more in-depth knowledge of the entire situation. Let’s go back in time to where this story first began – Kyoto.

The year was 1997. A time before Snapchat or Instagram or Facebook. A time before real friends. One shudders to contemplate such a primitive world, but for the sake of erudition, let us try.

On the 11th of December, 1997, 192 countries adopted the Kyoto Protocol. This protocol aimed at curtailing anthropogenic impact on the climate by reducing greenhouse gas emissions to 5.2% below the 1990 levels. Just to be clear, the veil of protection wasn’t to stop at people living in Kyoto, but hoped to encompass the entire world.

This protocol aimed at achieving its objective through a mechanism of ‘common but differentiated responsibilities’. The mechanism attributed a larger responsibility on the developed nations who had legally binding obligations. The levels to which countries had to curtail their emissions ranged from -8% to +10% of their 1990 emission levels.

In order to help developed nations meet their targets, a carbon market comprising several segments was developed, of which the following were widely adopted:

To know more about the Kyoto Protocol, click here. 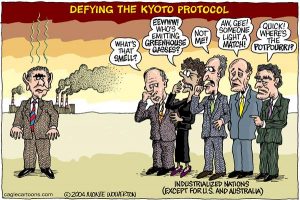 Unfortunately, as only 37 countries-excluding the largest and second largest emitters – ratified the protocol, greenhouse gas emissions actually rose by 40% from 1990 to 2009. Kyoto was definitely not a success, but the need for global action on climate change only became more pressing during those years. Moving forward, the world decided that another attempt at a global climate agreement should be made and this gave birth to the Paris Climate Agreement.

In 2015, global average temperatures reached 10C above the preindustrial era, a warming that had not occurred in over 11000 years. 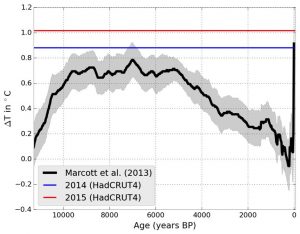 The same year, 166 countries ratified the Paris Climate Agreement with the aim to ensure that global average temperatures stay “well below” 20C above preindustrial times by the year 2100. The agreement also put forth the point that all efforts to limit the rise to 1.50C will be made. For a layman, a half a degree wouldn’t mean much. Why is it important to try to limit the rise to 1.50C?  It is because environmentally, half a degree could be translated into higher frequency of extreme weather conditions like hurricane Irma, Maria and Harvey, rising sea levels that would submerge low-lying nations, wildfires, crop failure and widespread diseases.

The Paris Climate Agreement differs from the Kyoto Protocol in two key ways:

Thus, it seems a little strange that the US is asking for more favorable conditions. What could be more favorable than “Do whatever you feel is feasible for your country?”.

The key tenets of the Agreement are:

For a more detailed description of the Paris Climate Agreement, read the final draft here.

Nationally Determined Contributions – US and India

In the Agreement, the United States had promised to reduce its emissions to 26-28% lower than 2005 levels by 2025. US also pledged to provide $3 billion to the Green Climate Fund.

At its end, India has committed to the following:

For more details about the intended nationally determined contributions of all the countries that have ratified this agreement, please click here.

What is the aftermath of US withdrawal from the Paris Climate Agreement? 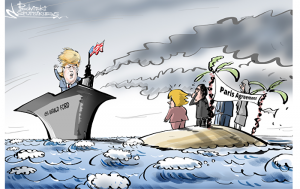 On the 1st of June this year when US, under the leadership of Donald Trump, first announced its withdrawal from the Paris Climate Agreement, a smoggy darkness descended upon the world. This withdrawal shouldn’t have come as a surprise given Trump’s election manifesto, but people couldn’t believe that the universe would allow such a regressive step to be taken.

The initial fear was that once US withdraws, other countries will be tempted to follow suit, thereby jeopardizing the effectiveness of the protocol. This, fortunately, has not happened. Countries the world over, developed and developing, have re-stated their pledge to help mitigate climate change-with or without the support of the US.

Also, according to Article 28 of the agreement, the earliest the United States, or any country for that matter, can effectively withdraw is by November 2020. By that time, hopefully, the United States will have a non-Trump President Elect. Despite this, there is still widespread concern. By the year 2020, several measures need to be put into place to enable a shift towards a low-carbon future. These steps won’t be taken by the US under Trump’s leadership, and that can hamper the viability of the 2 degrees aim.

Fortunately, soon after Trump’s announcement from the Rose garden, “ The American Coalition” consisting of over 1000 governors, mayors, universities and companies was formed in the US. It pledged continued support for the Paris Climate Agreement and has submitted a declaration stating “We are Still In” to the UN. In fact, Christiana Figueres, Executive Secretary of the United Nations Frameword Convention on Climate Change (UNFCCC), has said she is not worried. For more information on the domestic counter measures to Trump’s environmental stance, click here.

In the absence of US leadership, China may emerge as the sole leader of global climate negotiations. This may affect India negatively, given our geo-political relationship with China. However, this may also represent an opportunity for India to emerge as a leader alongside China for the climate negotiations and strengthen India’s global position.

Another major impact could be in terms of funding for green technology projects in India. In order to reduce India’s carbon footprint by 35% from 2005 levels, financial assistance from the Green Climate Fund would be needed. US so far has pledged $3Billion and transferred only $1Billion. If Trump decides not to contribute any funds, this could negatively impact India’s renewable energy trajectory.

Finally though, India can benefit from the uncertainty of US renewable energy projects and invest more in its own market. Foreign investments can be encouraged to develop an end-to-end renewables market in India, enabling India to become a key player on the technology front as well.

Overall, the repercussions of the US exit seem to be symbolic in nature. US is the largest economy in the world and the second largest producer of CO2 emissions. Pulling out of such a historic agreement only hurts the world’s perception of the Unites States. We at Zunroof think that this withdrawal shouldn’t have long-lasting effects on the feasibility and effectiveness of this Agreement.

Apologies for the confusion above. A few moments back, there was a massive cloud burst above our offices and within seconds the entire premises has become flooded. Several people have been injured and are being taken to the hospital. We are unsure of what to do as the roof seems to be caving in.

You may be wondering if any of this is true. It isn’t, yet. But it can be. Climate change is making extreme and sudden weather events a reality. Do not wait till occurrences like this become commonplace to make a change. Do your bit today and Go Solar with Zunroof!